Barnwell Village in Peterborough is beginning to feel like a home from home these days, this is the 3rd event we’ve performed at this past year.

Tonight saw us providing the entertainment for a fundraiser for the local school with a ‘valentines’ theme. There was love in air and nothing epitomises this better than numerous announcements asking the “owner of a silver Mercedes, registration KY15 RYC” to move their car as it was blocking the pub car park entrance.

Also, when one is attempting to create a ‘romantic ambiance’ I often feel ping pong is overlooked… Yes, that’s right, there was a ping pong table. We knew from past experience at the venue that there were no bats, balls and net, but Will (ever the resourceful one) made the appropriate enquiries and got Mark to bring some from home. The net was more difficult, but some scout-like fashioning of some discarded cardboard (by my good self) dealt with that hurdle. And away! Mark was a bit of a sly server and Tim’s underarm volley often lured his opponent into a misplaced smash attempt. Me and Will competed to see who was the crapest and Deb enjoyed a few games before the boys got over-competitive and ruined everything. We’re considering asking for a ping pong table as part of our food/drink rider going forwards…

Ever the professionals, we also put some thought into the music for this loved-up meeting and decided that Reach by S Club 7 would be suitable. Ladies and gentleman,  let me introduce you to our new Smash Hits medley featuring the best pop tunes from the 90s imported from our Rock The 90s show. Tonight saw it’s first outing and we’re pleased to report it went down a storm!

Anyhows, much merriment was had, lots of dosh was raised and a great night was had by all. As always, a special mention to Keith from Beetroot catering for the food and a thankyou to Tony Hull and the people of Barnwell for their hospitality. We’ll see you guys again soon no doubt, but until then – ciao for now!

And I haven’t even mentioned the A14…

If you’re after a band for a fundraiser in East Anglia check out out Party Band Cambridge page page. 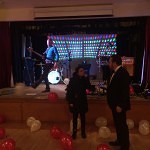 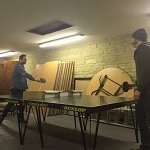 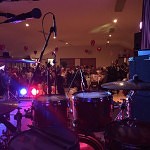 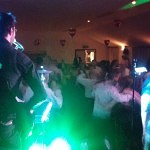 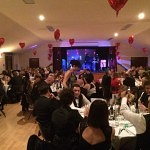 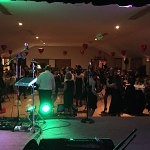